The project will include a parking garage, courtyard, pool, deck and communal areas, 351 apartments, and 7,000 sf of ground-floor retail space.

The city council recently approved part of a $7.6 million incentive package for the project.

Construction begins this month. Completion is set for December 2023.

The Texas Real Estate Research ​Center has more news like this:

14 May Post-pandemic recovery slow but steady

​​​COLLEGE STATION – Since the start of the year, COVID​-19 cases have been declining steadily and life has gradually returned to something resembling before the pandemic. Employment, however, is still a work in progress.

Texas, like the rest of the U.S., is still trying to recover jobs lost since March of last year. As of March 2021, Texas has done better regaining jobs than the nation as a whole. Texas didn't have as large a gap to make up, having lost at most around 12 percent of pre-pandemic jobs compared with 15 percent nationwide. 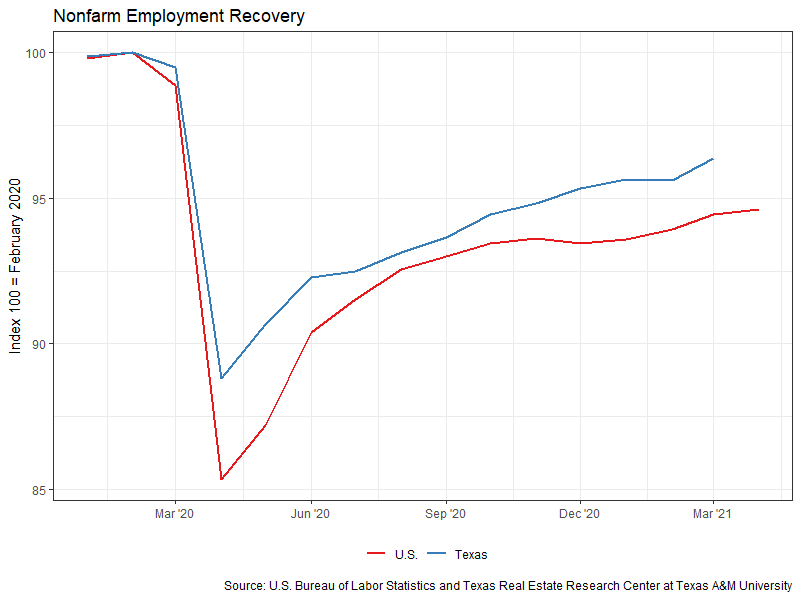 One of the key drivers toward recovery has been the COVID vaccine rollout. As of mid-April, approximately 66 percent of Texans aged 18 years or older reported receiving full or partial vaccine doses, according to the U.S. Census Bureau's Household Pulse Survey. An additional almost 8 percent reported that vaccination is on the to-do list.

On the housing front, the risk of losing one's home is still a real threat for many Texans. In general, homeowners appear to be in much better shape than renters. When asked in mid-April by the Census Bureau, almost 90 percent of Texas homeowners replied the threat of losing their home due to foreclosure in the upcoming months was either not very likely or not likely at all. Around one-third of renters, meanwhile, responded that the risk of upcoming eviction was either very likely or somewhat likely.

Finally, another nuance of the pandemic is the shift toward remote work. Almost a third of Texas households reported having at least one adult in the family still working remotely. Further data indicate that half the households claiming a college degree were still working away from the office. That figure drops to approximately 15 percent for households with only a high school degree.​

The Texas Real Estate Research Center has a wealth of economic information online for free.

Phase one of the waterfront community on Meyer Rd. includes 15 lots. Gehan is also contracted to buy the next two phases, which total 57 lots.

Gehan's two- and three-story homes are being designed by Fredd Lucille's Design. A park with a pier will be built in the second phase.

Stream, which is also handling leasing, will deliver the buildings in the third quarter.​

​​​​HOUSTON – Philadelphia-based Equus Capital Partners has purchased​ a 757,325-sf industrial portfolio near the intersection of I-45 and Beltway 8.

The portfolio consists of three rear-load buildings and two cross-dock buildings that were constructed between 2008 and 2014.

They were 62 percent leased to 11 tenants at the time of sale.

Equus will implement a capital improvement program and rebrand the properties as Park 845 Crossing.