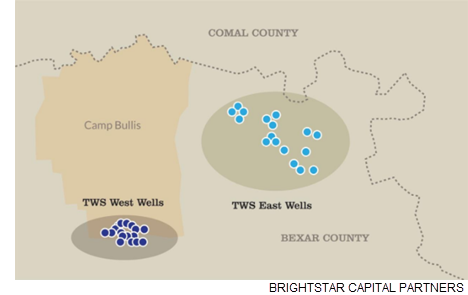 ​SAN ANTONIO – Future water shortages predicted for the Middle Trinity Aquifer, from which Camp Bullis and Camp Stanley draw well water, are less likely to drive those military operations away as deals with the San Antonio Water System (SAWS) reduce their reliance on that water source.

Camp Bullis, which is part of Joint Base San Antonio, is further along with its plans to have access to reliable potable water across its nearly 28,000-acre property in North San Antonio.

Camp Stanley officials said the plan is to connect itself to SAWS someday also.​ 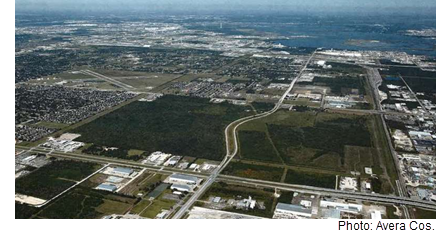 Both tracts sit alongside Bay Area Blvd.; one tract is 235 acres and the other is 134 acres.

Avera sold the 235-acre tract to Beazer Homes, which plans to develop a master-planned community on the land.

A portion of the land Beazer bought will also include a multifamily complex and a senior-living facility.

Avera will develop the remaining 134 acres with retail and commercial offerings to cater to the master-planned community.

Work on the site will start first quarter 2018. 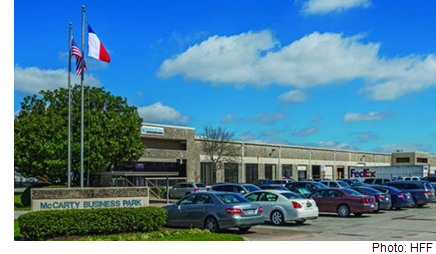 The portfolio is 95 percent leased.

​CARROLLTON – After an expansion that nearly doubles its footprint at the site, Illes Foods will soon occupy 155,496 sf of industrial space at 2022 McKenzie Dr.

Illes food scientists and culinologists make a "one stop" solution for all seasoning and flavors needs.

The company, which is also based in Carrollton, previously leased 73,584 sf.

Illes decided to renew its lease and expand into 81,912 additional sf.

The company will expand into its new space in January 2018.​ 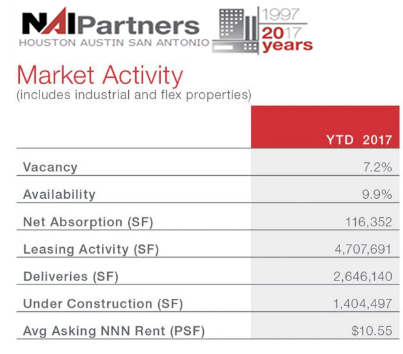 AUSTIN –Here are some market highlights​ from the Austin Industrial Monthly Market Snapshot for December 2017, from NAI Partners:

Investment sales volume is down year-over-year.